Juan Sebastián Ospina León is an Assistant Professor of Hispanic Studies. He teaches a range of courses in Latin American literature, theory, and film and media history. His research focuses on popular visual culture, with an emphasis on silent cinema and early-twentieth century illustrated periodicals. He has published his work in peer-reviewed journals in the US, Latin America, and Europe. He also serves on the editorial board of Vivomatografías, the first peer-reviewed journal devoted to the study of Latin American pre-cinema and silent cinema, published out of Buenos Aires. 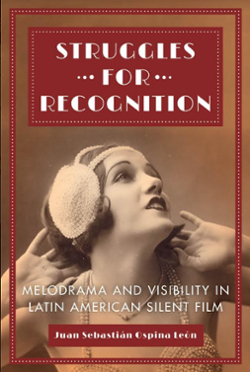 silent film and silent film culture. In this deeply archival investigation, Ospina León examines how melodrama visualized and shaped the social arena of urban modernity in early twentieth-century Latin America. Analyzing sociocultural contexts through film, this book demonstrates the ways in which melodrama was mobilized for both liberal and illiberal ends, revealing or concealing social inequities from Buenos Aires to Bogotá to Los Angeles. Ospina León critically engages Euro-American and Latin American scholarship seldom put into dialogue, offering an innovative theorization of melodrama relevant to scholars working within and across different national contexts.
At CUA, Dr. Ospina León contributes with his research and cross-media teaching approach. He also advises the Student Spanish Club and, as a Faculty-in-Residence, co-develops with CUA’s Honors Students educationally meaningful activities beyond the classroom.