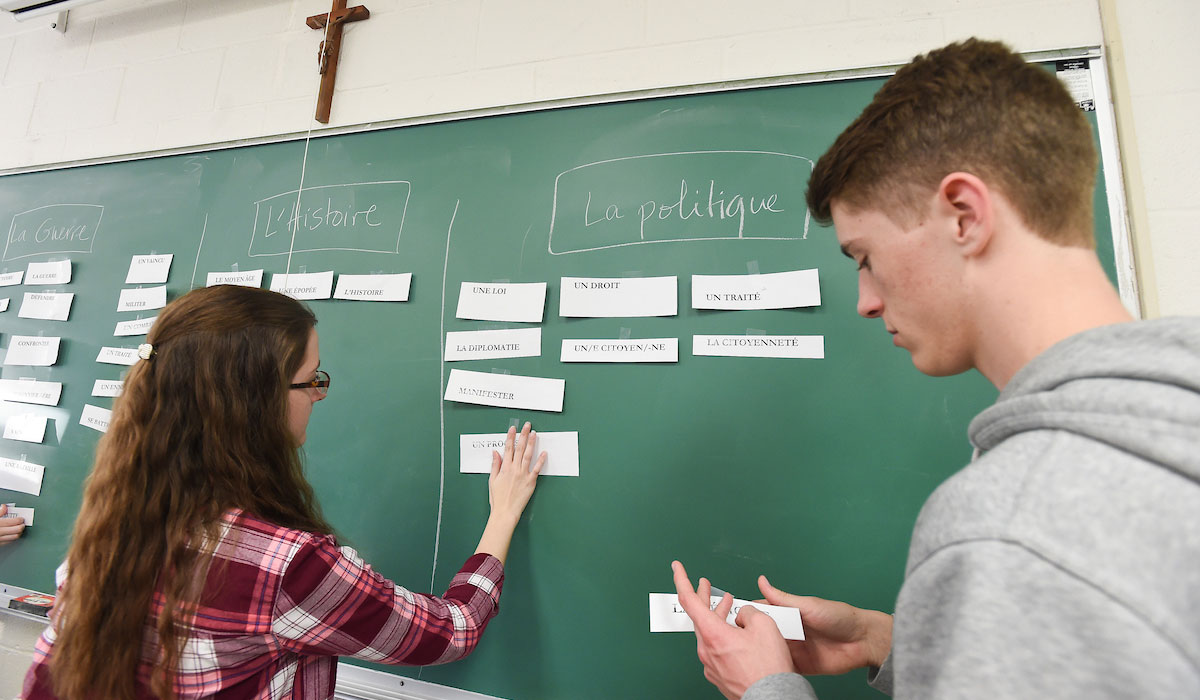 1. Knowing French will allow you not only to function but to compete effectively in the global economy of the future.

In many European countries, a second language is introduced in primary school and a third language in middle school. International job applicants who are proficient in at least two languages will be at a distinct advantage in the global market. When you know French, you can be part of communications and transactions occurring daily in French on every continent.

2. Speaking French will increase your job opportunities and salary potential.

Knowledge of a second language is essential in over 60 occupations. Canada is officially bilingual and requires labeling in English and French on all imported products. More than 1,200 French companies have subsidiaries in the U.S.. France is a world leader in the development of modern telecommunications, a market with explosive growth potential. The European Union, the second largest trading block in the world, recognizes French as an official language. Think about the many job opportunities with the airlines, import-export companies, and other international businesses. French is also a very useful language if you are thinking of working at the United Nations (where French is the second most widely used language, after English).

3. Studying French increases your appreciation of other people and their cultures.

French is the first or second language in more than 40 countries and is spoken by 125 million people around the world, on every continent. Because French is a foreign language of choice for so many people in the world, knowing French will also increase your chances of communicating in a non-English speaking country. You can use French to develop international friendships, as well as to communicate via the Internet.

4. French opens up an entire world of sporting events to enthusiasts.

French is always an official language used to announce events, winners, and medals at the Olympic Games. In Canada you can also follow hockey and baseball games in French. Automobile races (Le Mans and Monte Carlo), horse racing (Longchamps), tennis tournaments (French Open), and the Tour de France engage fans around the globe. When you know French, the international world of sports is open to you.

5. Knowing French will improve your vocabulary in English.

Some 40 to 50% of English vocabulary comes from French. The study of French will also enhance your grammar skills. As you develop greater skills in French, you also sharpen your skills in English.

6. Learning a new language, like French develops your critical and creative thinking skills./strong>

It will also increase your problem-solving skills and improve your memory, self-discipline, and self-esteem. Because progress is very easy to measure, you can quickly take pride in your new abilities. Knowing French can help you attain a number of important life skills.

7. Proficiency in French will significantly improve your chances of being accepted to the university and to graduate school.

France continues to be a leader and innovator in science and technology. Civil engineering (the Channel between England and France, the TGV –fastest train, the Concorde), medical technologies (the isolation of the HIV virus) and telecommunications (the Minitel with more than 20,000 on-line services and micro-chip telephone cards) are just a few areas in which the French play a leadership role. Knowing French can open the doors to graduate school and to important research.

8. Using French enhances your travel opportunities abroad to the Caribbean, Europe, and Africa and beyond.

After the United States, France is the second most visited tourist destination in the world. Paris was recently named by Fortune Magazine as one of the top ten global cities. When you speak French, you can be an educated tourist, ask for directions, get your own hotel room or tell a French friend about your own country.

9. French is the language of culture opening your door to art, music, dance, fashion, cuisine, and cinema.

As you quickly realize when you look at the foreign film section of your local video store, France is one of the most prolific producers of international films. The Cannes International Film Festival annually attracts the attention of the world when the best films, directors and actors are named. When you understand French you don’t need to rely on subtitles to enjoy a French film.

10. French is the language of many great literary masterpieces.

People around the world are familiar with La Chanson de Roland, Les Misérables, The Three Musketeers, 20,000 Leagues under the Sea, The Little Prince, and The Stranger. In fact, France has won more Nobel Prizes for literature than any other country. The French are also admired for their great philosophers, such as Descartes and Pascal, Rousseau, Voltaire, Camus, de Beauvoir, and Sartre. When you read French, you can enjoy these works and authors in the original.